Whoops I kinda forgot about this page, well if anyone still finds this here's some tips I've received via e-mail over the past few months:

This one's from Matthias in Germany (thanks!):

I have a working touchscreen with ubuntu 06.10
You need only some lines in the xorg.conf:

Only calibration is not possible with a app...

but I have some other problems:

- sound works only via headphone, not via speaker. perhaps something
wrong with the mixer (alsamixer shows only 3 or 4 channels... not to much).

- my wlan is very tumb. I can connect a accesspoint only within 3 meters
around. thats very bad.

- the touchpad mouse (upper right) should not act as the left mouse
button when I press it. Do You know how to disable that function?

This one is from miguel in Switzerland (thanks as well):

thanks for your page :D

i bought the vaio ux in the states. i really had to buy it...

well but im not al windows lover so, i find your page, test it with
kubuntu and it looked fine...

mi first idea was to make an image of both partition with "dd", and
thats was my luck...
the self burned recovery dvds are nothing worth.
i repartitioned the hole harddrive and made a ntfs and a ext3
partions, and the problems begun to ingrese. after this mistake a
wassend anymore able to install the windows right... the windows
setup stopt after the interactive setup questions and i had to go to
the beginning. grumpf...

in the end i made four partitions:
first, recover harddrive 6.4GB
second, ntfs for windows 12GB
third, ext3 for linux (i thinking to install debian instead of kubuntu)
fourth, swap

well after that i made a "dd" copy from the save file, back to the
harddrive.
and *horeca* windows is now again on the partition, up and running...

now i have a sony ux180 multiboot and the best i can activate the
recovery over the grup bootloader...:)

sorry for the bad english, but i hope you enjoy to read these lines...

questions,
do you have an icq account or something similar?
do you use irc?

There's more e-mails, but they are mostly questions. Also please note that I no longer own this awesome little device (had to move up...to a larger screen!).
Thanks to everyone that contacted me, and sorry if I wasn't able to respond. - roto


Wow, I didn't think a useless little page like mine with just a few pix and a bit of text would spark so much interest. But I

guess I really WAS one of the first few people trying (or even thinking of trying) Linux on this expensive little box of
circuits. Thanks to everyone who emailed me with questions, comments, and suggestions. Here are the sites that I've personally
found that link to my site (yipee!):

Anyway, I wasn't able to actually INSTALL Linux to the HD till now because I was on a week's vacation out of the country. But when I
came back I saw there was a ton of interest in the subject, so here's a small update for those that are paying attention.
I thought about SuSE Linux 10.1, but wasn't in the mood to download the 5 ISO images and burn them (no external DVD drive for
DVD ISO). So I grabbed Ubuntu Dapper Drake (many times I have said I wouldn't try Ubuntu... but oh well). The install was
painless, took about 30 minutes. Everything went off fine. HD was repartitioned, and after the install the packages and system
files were auto-updated by the ubuntu updater thing. That took a while. BTW, the install was done while the UX was mounted on its
little port replicator with the WiFi button ON. Dunno if that matters.

Here's some fun stuff to look at (interesting things are bolded):


A screenshot of Ubuntu running and various other pics: 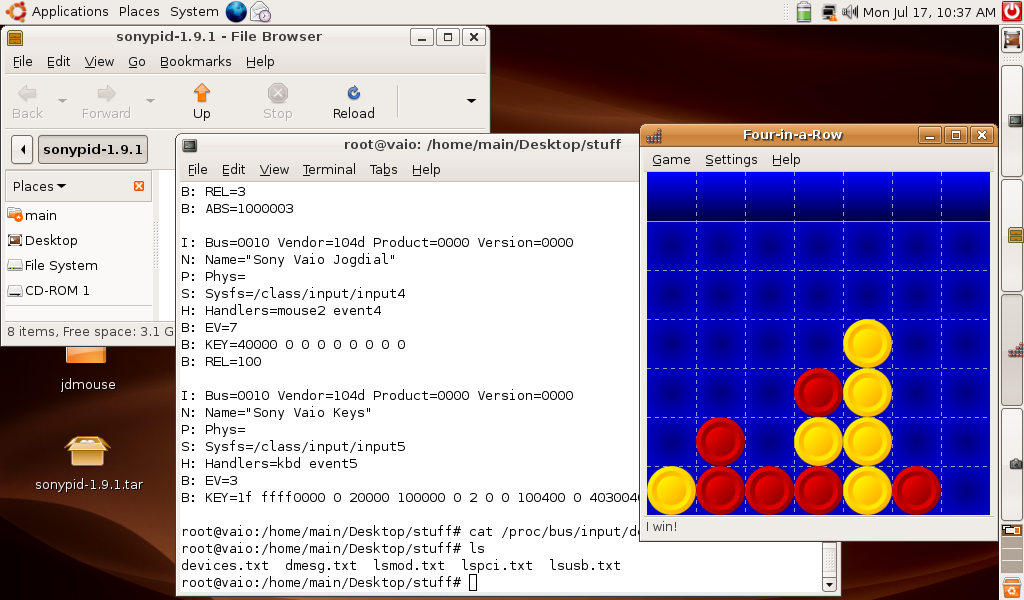 
Some more thoughts and findings:


0) The Touchscreen is SOMEWHAT recognized. It's recognized as "GUNZE USB Touch Panel" and is accessible through /dev/input/js0 (just do a cat /dev/input/js0 and touch the panel). I'm sure there's an easy way to hook that into X but I don't really feel like trying that right now. I'm just so damn tired and jetlagged. Oh I was informed there are Gunze drivers for X. Go seek.
* Click HERE for a video of me testing the Touchscreen.*

1) The "camera" seems to be recognized, but after a short search it seems no one has successfully utilized it just yet. Sony seems to re-use the same camera modules in many of it's notebooks so thats why the "Camera" (of which there are two here...) was recognized.

2) Bluetooth works great. Here's a sampling:
Run "sudo hcitool scan"  and turn on your USB Device (in my case it was a Bluetooth GPS module). The hcitool should find it. Afterwards try to connect to the device by "sudo hidd -connect <MAC OF DEVICE>" <- thats where I ran into trouble, didn't feel like investigating it further anyway.

My GPS module and me testing the Bluetooth.


3) Sound didn't seem to work for me for some odd reason, I didn't get too much further into finding out why. I'm just exploring the basics here people.

4) It seems that I SHOULD have gone with SuSE instead as they have a pre-built .rpm that includes drivers/tools for GUNZE devices... damn me. Oh well. I attempted to install the drivers and tools by hand (compiling) with absolutely no luck, so I gave up. Other VAIO users with touchscreens have reported (thanks!) that the Gunze drivers do indeed work for them, but they don't have the UX180P so no one can confirm it for me yet. And I'm not going to bother trying it any further...sorry!

5) The speshul VAIO key and the ZOOM buttons don't work. AT ALL. They are recognized by the OS as "Sony VAIO Keys" but thats about it. Watching ACPI and checking logs and doing everything I could think of didn't show me any signs that the buttons are detected (the other buttons and mouse buttons do show up). There's a group of people working on getting drivers and tools for VAIO buttons to work, google for it.

6) You can change the brightness of your screen without installing any tools by doing "echo 7 > /proc/acpi/sony/brightness" the number is between 0 and 8. There's a program called "spicctrl" or something online that controls and queries many Sony hardware features. I tried it out, but it didn't seem too interesting. Shows fanspeeds/temps/batt/etc, everything ACPI already does. Oh and it changes the brightness of the screen... which I can do already! heh.

7) X works great, fills the screen this time. WiFi works fine. Still haven't been able to get the Cingular EDGE GPRS modem to work, haven't tried too hard because I dont have an account with them anyway. I saw on some forum that a few people have gotten Sony GPRS modems to work on other VAIO models. So this shouldn't be a problem for long.

8) The Fingerprint Scanner seems to be recognized too, but I didn't even bother trying it in XP so why try it in Linux? There's a lot of work to get it running in Linux, as far as I have seen. So good luck with that!


Again, thanks to everyone who emailed me with questions/comments/concerns/praise, I appreciate your input! To anyone that wants me to link to their site (if you deal with hacking Linux on the UX180P, just email me and I'll throw it up here.


I picked up my Sony VAIO UX180P MicroPC yesterday (07/03/06) from Fry's Electronics. The "expected" release date was July 5th, but it seems Sony shipped these things out much sooner than expected. I checked Outpost.com and saw they were "Shipping" these things, so I decided to check out my local Fry's Electronics store and to my amazement they JUST got 5 of these things shipped to them that morning. I got lucky and snapped one up right away.
First Impressions: This thing is TINY. The screen is like 4.5" but is really clear, but I won't go into a REVIEWof this thing as tons of other sites have reviews. SO on to the Linux part.

I googled around and haven't seen anyone else even ATTEMPTING to boot Linux on this thing (even though the Japanese had the UX50/90 already)...why is that? I dunno. So I decided to give it a shot. And it was surprisingly easy. And everything works just fine, the UX180P is just an ultra-mini-micro PC. Since it runs the full version of Windows XP Pro, it shouldn't have too much trouble with most current Linux distro's. The machine (without the docking adapter) has one USB port and obviously thats how we're going to load Linux on it. Plugging the external CD-ROM drive into the USB port and rebooting (obviously) didn't do anything because we haven't told the machine to boot from external media. I attempted to get into the BIOS of the UX using many different key combinations but Fn+F2 did it. Right after you boot the UX, start holding Fn and keep clicking F2 like there's no tomorrow.

Here's a pic of the BIOS settings we'll have to change:

As you can see we have to enable booting from an external device.

Here we have to set the USB Optical Drive to boot first. And thats it, we're done.

This is where I got stuck. After booting from the Auditor CD, the boot process halted because the "media was not found" or something.
I figured out that I needed to add some booting options to the boot: prompt. Specifically I needed to type this in:
boot: vmlinuz bootusb screen=1024x600
This tells the OS that the files it needs to load are on the external USB drive (it doen't know it by default). And thats it! Auditor booted as you can see below.

Closeup of the boot process. Sorry for the lame pics.

Further along, enabling all devices and such... Most everything works. Except for the Intel WiFI NIC (no surprise there).

And we're in KDE. The screen doesn't fit completely, but thats because we haven't enabled LCD Stretching in the BIOS (I think...).
Changing resolutions didn't work.

After some manual network configuration (the usual) I got online. Here you see Firefox and BitchX.

A closer view. Everything works pretty well. The touchscreen doesn't work obviously, needs specific drivers. Zoom doesn't work... obvious why.
The touchpad (thingy) works fine like a mouse and so do the buttons.

One final shot of the External drive after Auditor booted.

What Works:
What Doesn't Work:

What I Plan To Try Next: